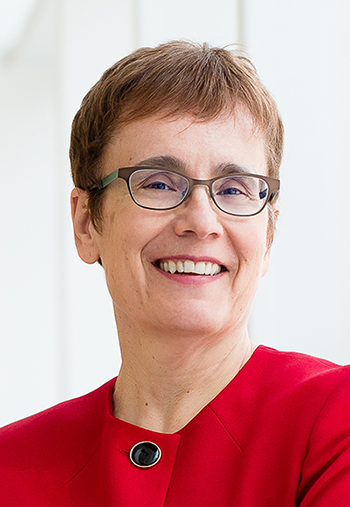 The Canadian Research Knowledge Network (CRKN) is pleased to announce the appointment of Dr. Annette Trimbee as Chair of its Board of Directors for a three-year term, commencing October 17, 2019.

Dr. Trimbee has served as President and Vice-Chancellor at the University of Winnipeg since August 2014, and was reappointed in 2018 for a second term. As President, Dr. Trimbee has accomplished key initiatives including a university-wide strategic directions plan, enacting a three-year budget strategy, and implementing an Indigenous course requirement for all undergraduate students, which is among the first in Canada.

Prior to joining the University of Winnipeg, Dr. Trimbee served as Deputy Minister of several departments in the Alberta government, including Finance and Treasury Board, and Advanced Education and Technology. Dr. Trimbee’s key accomplishments included Alberta Budget 2012 and 2013, the redesign of Alberta’s innovation system, creation of the Alberta Innovates Corporations, Campus Alberta, and the development of Alberta’s Health Policy Framework and Integrated Resource Management Policy Framework.

“Dr. Trimbee will bring extensive expertise in strategy and collaboration to CRKN,” commented Gwen Bird, Vice-Chair of CRKN’s Board of Directors. “Her accomplishments in both academic and public policy environments demonstrate her ability to provide direction, build relationships, and foster innovation, which benefits all. We are thrilled to welcome her to the CRKN Board.”

“This is an exciting time to join CRKN,” said Dr. Trimbee. “As the organization launches a new strategic plan, I look forward to working alongside fellow Board members and staff to effect change in the scholarly research community in Canada. I’m honoured to be named Chair of the Board and given the opportunity to contribute to the continued growth of CRKN.”

Dr. Trimbee currently serves on the boards of Universities Canada and USports, which oversees sports at 56 Canadian universities. She is a member of the Public Interest Law Centre Advisory Committee, which informs the Centre’s case selections and its case portfolio of human rights, environmental, consumer, and Indigenous law.

Dr. Trimbee will succeed Dr. Alan Shepard, who served a three-year term beginning in 2016. “The Board of Directors is grateful for Dr. Shepard’s leadership, especially through key initiatives including the merger between CRKN and Canadiana.org and the development of the 2019-2024 Strategic Plan,” continued Gwen Bird. “We thank Dr. Shepard for his service over the past three years.”