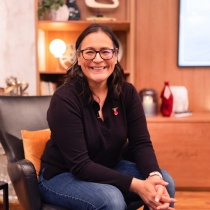 Born to a Quebec father and an Innu mother, Michèle Audette, a mother of five, became involved in the fight against discrimination of Aboriginal women early in her life. At the age of 27, she became President of the Association des femmes autochtones du Québec. Subsequently, she held the position of Deputy Minister in charge of the Secrétariat à la condition féminine du Québec. From 2012 to 2014, she chaired the Native Women's Association of Canada. In 2016, she was appointed Commissioner for the National Inquiry into Missing and Murdered Indigenous Women and Girls.

To highlight the importance of her commitment to the causes of Aboriginal women, her major role in mobilizing for a national commission of inquiry into missing and murdered Aboriginal women and her tireless work for women reconciliation between peoples, the Université de Montréal awarded Michèle Audette with an honorary doctorate in August 2018.

We are honoured to welcome Senator Michèle Audette to the 2022 CRKN Conference as keynote speaker. Join us for a discussion of her involvement in the fight against the discrimination of Indigenous women and how she is supporting their needs and voices, as well as how she has worked to create educational opportunities for Indigenous youth in Canada, and promote reconciliation.